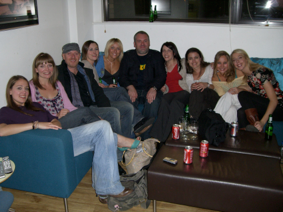 During an extremely hectic summer I was invited to perform in an all-female house band for a TV pilot for a brand new Chris Moyles TV series called Chris Moyles’ Quiz Night. The night before I finished a gig in Preston at 1am, had to start the soundcheck at the London studios at 9am. We finished the show at 10pm and I had to be at the airport the next morning at 4am!

It was an extremely long day learning the parts, doing camera run-through rehearsals, dress rehearsals and the show with a live audience. I laughed the whole way through – it’s a very funny show. The actual TV series then took place later in the year, and another 5 series after that over the next 4 years! Many thanks to Steve and Paul for everything! Here are some musical clips from the series: